Welcome back to Adventures with Autism Works. Since my last post, we have been busy getting our website online as well as trying to gather support and develop relationships with potential clients. Peter is making progress with the IT sector, while in the meantime we are delighted to have the support of Mark Lever, Chief Executive  of the National Autistic Society, the Rt Hon Cheryl Gillan MP, from whom the UK Autism Bill that was passed last year originated and Professor Tony Attwood, a clinical psychologist and author of The Complete Guide to Asperger's Syndrome, who believes that Autism Works can be replicated not just throughout the UK but around the world.
Much else has developed this week in terms of looking at ways to gather publicity for Autism Works, including promoting the Communication Shutdown campaign to help raise funds and further awareness of autism in over 40 countries. Participating in Communication Shutdown involves shutting down all social networking sites including Facebook, Twitter, LinkedIn etc. for one whole day on November 1, the purpose being to show how it may feel to be a person on the autistic spectrum in relation to social communication difficulties often experience by people on the autistic spectrum.


Forgetting to bring his phone to work today, Peter suddenly noticed that he was 'unconnected', almost like losing a arm or a leg! I guess this shows just how used to electronic communication we have become and that without it, in short, we are useless. But stepping out of such comfort zones can often be so helpful in terms of understanding what it may be like to be a person on the autistic spectrum, a worldwide effect that the Communication Shutdown campaign hopes to have.


To understand of how it may feel to be a person on the autistic spectrum, when I was delivering training on Asperger's Syndrome to foster carers earlier this week, I gave participants a drama exercise, where working in pairs, one person imagined that they were from Mars and couldn't speak, write or understand any English, while the other was the first human being they had seen after crash landing. I then gave the person from Mars an object that they had just picked up after landing (a boomerang) and being a curious visitor, they were asked the first human they saw what the object was without being able to use language, spoken or written. While the people from Mars became very confused, the people from Earth felt frustrated through not knowing what to do to get through to their visitors from Mars. This is how it can feel to be a person on the autistic spectrum.


Martijn Dekker, who started one of the first E-mailing lists for adults on the autistic spectrum described the internet as being for autistics what sign language is for the deaf. When researching my Masters Dissertation back in 2001 on Autism and Online Communication, I found that many adults on the autistic spectrum find Email a much more comfortable form of communication because they didn't have to balance body-language such as eye-contact and facial expressions with verbal language. In this way, online communication has been a strong tool for the autism population to 'discover itself' as well as express both their abilities and needs through groups like Artists and Autism on Facebook.


Social networking sites are increasingly playing such a big part in many peoples lives, aspie and neurotypical, with over four billion worldwide now subscribed to social networking sites, it is almost at the stage where it is difficult to imagine how unconnected our lives would be without them. Such unconnected feelings through no access to social networking sites for a day, the Communication Shutdown campaign hopes, will give the world an idea of how it may feel to be a person on the autistic spectrum, thus encouraging empathy in relation to autism as well as raising much needed funds for services for people with autism as well as raising international awareness.


To find out more about the Communication Shutdown campaign, including how you can participate, please use the following link: 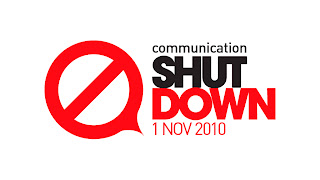 Before we start imagining a world without Facebook, Twitter, LinkedIn, MySpace etc. be sure to continue check this space for more news regarding Autism Works.