Since taking up my post at Autism Works, a major change that I feel I have noticed within myself, particularly from getting to grips with the concept of social enterprise and the recently-passed Social Values Act, which I have been exploring this week, is how much more socially aware I have become, which I also feel has reinforced my work as an Asperger trainer.

The concept of social enterprise and the Social Value Act may immediately sound like 'great ideas', but like with ideas that sound great on paper, the hard part comes when applying them to business practice, particularly when measuring their impact. A useful way towards putting such concepts into practice is for one to 'tune' their way of thought towards them, including applying a conscious awareness of the themes involved. A story from the early part of life of the Buddha that I found inspiring and that perhaps distantly relates to the themes in the Social Value Act was a time when the young Prince Siddhartha observed the annual ploughing festival with his father in the kingdom where he lived in what is now northern India and saw that when a plough overturned a stretch of soil, an earthworm was uncovered and a bird flew down from a nearby tree and ate the worm. From this moment, the young Prince Siddharta noticed the concept of inter-connection.

Inter-connection as seen from such a simple observation could be a useful starting point for applying the social value act, by looking at the inter-connection of values, and in the case of Autism Works, how values that the company has in relation to its social enterprise status, can have an effect on enabling other such values for the autism community as well as the Corporate and Social Responsibility element of the business community, including contributing to improved quality life for adults on the autistic spectrum. In turn, excessive dependence on their families as well as on professionals who may be pushed to the limit in supporting them can be reduced while employers benefit from inclusion of adults on the autistic spectrum in their workforce, helping to foster team culture and diversity. 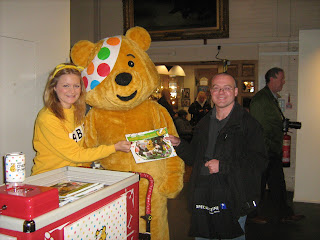 Understanding the difference that you are making through a simple act is a theme that has great significance here and now as I write this blog, for today is Children in Need day! A part of my previous job with Durham County Council that I miss is dressing up as Pudsey each year and scouring the executive's offices at Durham County Hall for donations with two students from Durham Trinity School's Autistic Provision Unit. To do my part for Children in Need this year I have bought this year's beautiful BBC Look North 2013 Weather Calendar, the proceeds of which will go towards the charity. There are some spectacular images in the 2013 edition, including one of the Northern Lights over Northumberland. If you would like to contribute to Children in Need 2012 or if you are looking for any early ideas for Christmas presents with the festive season approaching, click on the photograph of me with Pudsey and Hannah Bayman from BBC Look North's weather team if you would like to purchase a 2013 BBC Look North Weather calendar.

On the theme of giving, I have also visited the Vivekarama Buddhist Temple in Sunderland to observe the Kathina festival, a time of giving in Buddhism when the lay community express gratitude to monks with alms giving, including giving of new robes. If you feel in such a giving mood, you may like to visit my sponsorship page for my Kilimanjaro challenge to raise much-needed funds for Daisy Chain at www.justgiving.com/Chris-MitchellGNR

Autism Works would like to thank everyone who has participated in any fundraising activities or has kindly donated in aid of Children in Need 2012. What I especially miss about dressing up as Pudsey was when people asked who was in the bear suit, and the Durham Trinity students would say: 'This is Pudsey Bear himself!'