Coming Alive, Being Uplifted and Interdependent Networks of Values

Whereas last week's adventure took me to Scandinavia, this week has brought me back a little closer to home, to Middlesbrough where I have been speaking at the MAIN Project's World Autism Day Conference, talking about key issues regarding the Working Together for Change agenda and the Autism Strategy. The highlight of the day though was some superb performances from Middlesbrough's Beverley School Choir and Scott James, whom you may remember also spoke at the Autistic Voices Conference in Manchester in December.

It is incredible how people with Asperger's Syndrome seem to 'come alive' in certain situations. A week ago, talking on Saturday Morning Live, Will Hadcroft, best known as the author of The Feeling's Unmutual and the Ann Droyd series, described how, as a person with Asperger's Syndrome that though he still feels uncomfortable in social situations, when giving a talk on Asperger's Syndrome to an audience, he 'comes alive'. Similarly, giving talks on Asperger's Syndrome has brought me to life, and I also feel that it has enabled people to see who I actually am. Another speaker with Asperger's Syndrome described being on the autistic spectrum as like being in a film, but whereas others seem to have a script to read from, you don't, making it difficult to know what to say sometimes. Scott James, who gave some performances that uplifted the audience, including myself, came alive in a similar way through singing, which he found to an effective way for him to express himself. From his performances with Middlesbrough's Beverley School Choir, it was easy to see why Scott's self-esteem changed dramatically, despite having been written off by so many, when he discovered his hidden talent after a series of singing lessons. As well as performing his hit Through My Eyes, he also performed some tracks from his new album due to be released later this year.


Going back to last week's visit to Denmark, I also observed some values within Danish society that can be learned from effectively in the UK, including enabling the recently passed Social Value Act to deliver. Danish society is shaped around a network of values built on relations of interdependence, a theme that I have talked much about here in a spiritual context. In an economic context though, one of the purposes of the Social Value Act, is to put people before profit, considering the impact that a procurement will have on the local community. This where an awareness of interconnected values helps, as the procurement that offers the best social value may not be the lowest-cost, but rather the one best-placed to be of benefit to the local community, including the local autism community. After all, autism and Asperger's Syndrome affect those not on the autistic spectrum too.

Similarly, one of the main reasons why I chose Daisy Chain as my charity to do the 2012 Bupa Great North Run for was largely because I was impressed with how they had got local businesses on board. I have organised two events in April to continue to raise funds for the charity, including a quiz night and a gig, which will take place on 19th and 25th April respectively. The quiz night will be hosted by Ian Geldard, who has given many seminars on autism from the sibling's perspective, growing up with a brother with autism. The gig features Sheikh Ya Mojo. Fronted by the talented Andy Atkinson, Sheikh Ya Mojo play rock and blues classics from the Rolling Stones, the Doors, Ray Charles, Dr Feelgood and many more. For more information on these events, click on the posters below. To find out more about my challenge, please visit my sponsorship page at http://www.justgiving.com/Chris-MitchellGNR/ 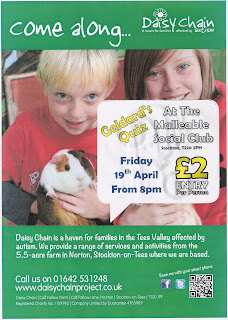 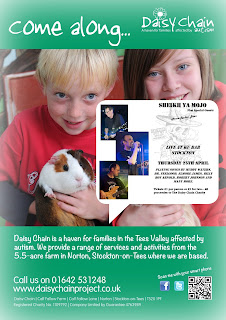 In the meantime, I am looking forward to getting some practical software testing experience in the coming weeks. But to hear how these events go as well as my training and preparation, stayed tuned to Adventures with Autism Works. Happy Easter!

Special thanks to the MAIN Project for inviting me to speak at their World Autism Day Conference and well done to Middlesbrough's Beverley School Choir for raising funds to buy supplies for Romanian schoolchildren, which Scott James will take when he visits Romania next month. I wish Scott every success with his visit.