Welcome back to Adventures with Autism Works! Sorry about the lengthy absence between now and my last post, but to say that I haven't been pre-occupied with other things would be an understatement! But the big news since my last post is, as some may already have seen via the social networks, is that I successfully managed to complete the second part of my double challenge to raise much-needed funds for the Daisy Chain project by reaching the summit of Kilimanjaro, Africa's highest peak at 5895m!

After a week of trekking through some of the most variable sets of micro-climates I have experienced on a trek, from the sweltering heat of rainforests to mist-shrouded lava fields as well as sleeping in temperatures of lower than -10 outside, I began my summit attempt at 12.00 midnight the previous evening. What often makes mountain treks a challenge is that they are a big step outside your comfort zone, thus a good opportunity to practice mindfulness, but the Kilimanjaro summit attempt is a further step outside your comfort zone in that you are trekking in temperatures lower than -10 and in total darkness!

Trekking in total darkness was a huge step into the unknown for me, but it worked in my favour. Aspects of life that as a person with Asperger's Syndrome I have experienced difficulty in coping with are doubt and uncertainty. Facing up to them during such challenges has enabled me to cope much better with them than previously. During a mountain trek, doubt can creep into the mind as to whether or not you can complete the challenge just by seeing the height and distance ahead. When trekking from 4650m to an eventual 5895m in total darkness with only a head torch to light the immediate way ahead, I couldn't see just how high I would be going! This helped me to stay focused on the immediate way ahead of me, and after trekking for eight hours, I reached the summit at Uhuru Peak and 8.00am in the morning.

Coming back down from the summit was also challenging where I had to be much more careful with my footing stepping on scree brought down the mountain by melting glaciers. Still being dressed in multiple layers as well as hand and boot warmers that I had put on for trekking in temperatures lower than -10, it was only on the way down after experiencing feelings of triumph and relief when reaching the summit, when I also began to notice that I was 'toasting' after the temperatures shot up after the sun rose. After the journey to and back from the summit, I went on a safari through the main game parks of Tanzania including Lake Manyara, Tarangire and the Ngorongoro Crater. The safari was an experience that was just as memorable, seeing a variety of animals in the wild, with the largest concentration of animals being in the Ngorongoro crater, the world's largest caldera (volcanically-formed crater). The herds of elephants, zebras and giraffes were spectacular against unmistakably African landscapes of grassland and Acacia trees. For me though, biggest thrill was seeing a family of lions in the crater. Kilimanjaro may be the roof of Africa, but for me, the Ngorongoro Crater is Africa's 'Garden of Eden'.

As readers of this blog will know, the eight-day Kilimanjaro trek has been part of a much bigger journey over two years starting with training and fundraising activities for the 2012 Bupa Great North Run before focusing on Kilimanjaro, from which I have learned so much. It has had its ups and downs, but I have felt that by being with each moment during the journey, has enabled me to face up to each challenge as it has unfolded, rather like coping with being diagnosed with Asperger's Syndrome and the life challenges that the condition can present. 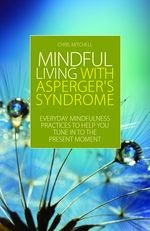 Readers may also remember that in my previous post, I had another exciting announcement when I get back home, which is that I am publishing a third book in December! The title of my new book, published by Jessica Kingsley Publishers, is Mindful Living with Asperger's Syndrome: Everyday Mindfulness Practices to help you tune into the Present Moment. This has also been a work in progress for quite some time. Unlike my previous book, Asperger's Syndrome and Mindfulness: taking Refuge in the Buddha, this book is about mindfulness in a secular, rather than spiritual context, and includes some simple techniques and ways to integrate and apply mindfulness into daily life, including coping with ups and downs Asperger's Syndrome can present, such as stress, anxiety and depression, just by being with them, rather than resisting them or working against them. To find out more about it, click on the cover image on the right:

With funding falling within many autism charities, especially local charities, and the need for more access to services to both people and families affected by autism, which many charities formed by local champions have provided, there may well be another challenge out there somewhere for me, who knows? Stay tuned to see how this unfolds.